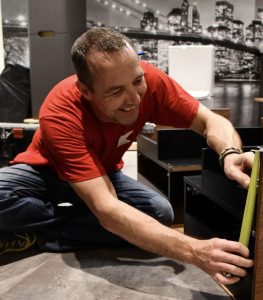 Kingshotts of Wessex is the brainchild of Allan Kingshott. Carrying on a family tradition passed to him by his grandfather Jim who was a cabinet maker. Allan remembers sitting on a bench in his grandfathers workshop watching him work and later learning the basics whilst assisting him. At aged 16 he took those skills further into an apprenticeship, later wining an MOD competition for joinery.

Allans’ skills come from over 25 years worth of experience in kitchen and bathroom fitting which extended into designing and included making bespoke items for both kitchens and bathrooms. Having previously sold and installed kitchens from brochures, Allan decided that fulfilling his dream to own his own elite showroom was the next logical step. With the name and logo inspired by his grandfathers old logo and premises secured, his vision was to have a free – flowing space able to showcase room sets properly so they could be truly appreciated; displaying products as they were intended to be seen. We are particularly proud to present a fully functioning kitchen offering the chance for customers to experience and try some of the new technologies first hand, sous vide, steambake oven, intelligent hob and boiling or filtered water straight from the tap.

Ready to find out more?

It is said that a kitchen is the heart of the home and we believe that to be true. Whether small or large, the kitchen is the hub of the home. It’s where meals are created, it fuels bodies, minds and souls of friends and families all over the world. Some say that while life may be created in the bedroom, it is certainly lived in the kitchen.
With this in mind our kitchens are designed to suit your own individual needs and lifestyle.
.

The bathroom is not just for the functional purpose of personal hygiene – or is it? Why not create your own private retreat, somewhere to take time out and relax and ease away the daily strains?

Easy to clean and maintain for family bathing then transforms for a relaxing time out deep scented bubble bath with ambient lighting and music or a spacious invigorating shower. We are able to create your own oasis that suits you and your families desires and needs.
.